Thursday 8th December saw The Ospreys return to Twickenham for our inaugural networking lunch. This year, we were invited to join in on the Networking Breakfast which saw 4 guest speakers talk about Resilience and Getting Over the Line in Women’s Sport. Sarah Winckless, former British rower started off the talks, and what followed was some really interesting and conversation provoking topics.

After the breakfast we congregated over to our seats to watch the women’s match, after last year’s 52 nil defeat we were confident for a light blue win.

Oxf*rd were the first to draw blood with a penalty kick to be three points up around 15mins into first half, and the rest of the match was disappointingly the same. Cambridge really dominating possession and having all the pressure but not quite managing to make anything of it. The entire second half was dominated by Cambridge who were playing almost exclusively in the Oxford defending half, but sadly no tries nor points were scored by either team, resulting in a rather underwhelming 3-0 loss to Cambridge. Unlucky to the girls, there is always next year, plus, the return fixture in BUCS were they are sure to assert their dominance and get that well-deserved win against the other side. 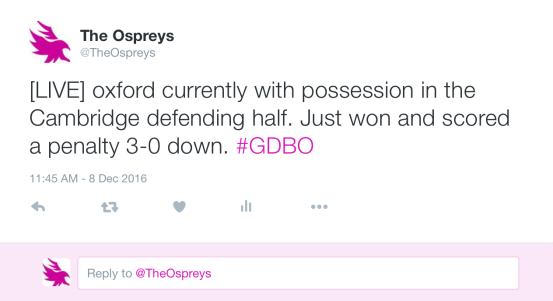 The main event of the day followed with a lunch in the Twickenham hospitality suite where there was plenty of wine and an open bar, which The Ospreys thoroughly enjoyed.

There was a strong contingent of both resident and alumnae Ospreys (and their families) in presence which was nice to see and encourage some catching up with recent graduates.

After the lunch, we headed out to watch the 135th Mens Varsity Match, a lot rested on Captain Daniel Dass of Cambridge’s shoulders who did not want to lead the men into a 7th successive loss. This would have resulted in the most losses in a row, ever, in a varsity match…

Oxford were the first to draw blood, in a similar fashion to their female counterparts scoring a penalty kick within the first few minutes, this did not stop Cambridge who just came back even stronger and proved to be the better side resulting in a great performance and a 23-18 win for the light blues.

What a day. Until next year Twickenham. #GDBO

Huge scenes from the 2s/3s CUHC Varsities on the weekend with some nail-biting games!!! The women’s 3s (Bedouins) took an incredible WIN against O*ford on Shuffles ! The 2s (Nomads) finished with a draw and narrowly missed out on a win on shuffles. CONGRATS TO BOTH TEAMS!!! Best of luck to the BLUES in their Varsity on March 1st!!! #gdbo
Congrats to the CAMBRIDGE COUGARS CHEERLEADING TEAM with their female team taking a HUGE WIN against O*ford and a 5th place finish across the whole country !!!! Amazing work !! #GDBO
Congratulations to the CURUFC Women’s Blues !!!! After winning 63-0 today against Sussex they finish SECOND in BUCS Prem South league! CONGRATS GIRLS! #gbdo
** CHRISTMAS LUNCH** Thursday 5th December - we are hosting a two course lunch at Hawks which we are heavily subsidising. Only £6 each!!! See the link in the email to sign up: https://docs.google.com/forms/d/e/1FAIpQLSepTHskfnZt9imBB_1QyY5-d5c5Z4tCN054bNPD9C0nzDNCqA/viewform?usp=sf_link (Rumour has it sticky toffee pudding is on the menu...) Have yourselves a great Winning Wednesday!